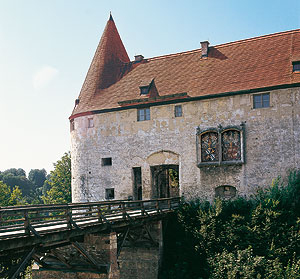 In the late Middle Ages this courtyard lay within the main castle complex. It had a separate legal status and access was strictly controlled.

On the north side of the courtyard is the mighty Georg’s Gate, named after Duke Georg the Rich of Bavaria-Landshut who ordered its construction. The Bavarian and Polish coats of arms on the gate (left and right respectively) refer to the patron of the building work, Duke Georg the Rich, and his consort Hedwig, a daughter of the Polish king. The marriage of the couple in 1475 made history as the “Landshut Wedding”, which is still celebrated today.

On the west side of the courtyard is where the brewery and bakery used to be. Today it is the castle café. At one time the ducal stables were located in this area, together with a fountain and a horse pond, the shape of which is indicated today with paving slabs.

On the opposite side, the east side, the old castle steps lead down through the tower named Stephansturm into the town. Although the bottom of the steps lay within what was already a fortified town, this approach to the castle was additionally protected with its own wards and towers. 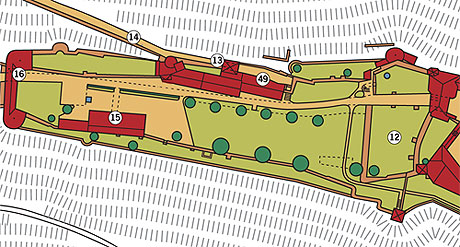