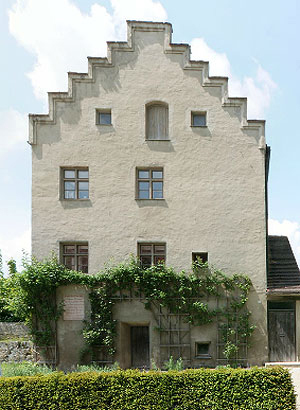 The "Aventinus House" once used to be the apartment of the chaplain of the chapel in the inner part of the castle. According to legend, the famous Bavarian historian and humanist, Johannes Turmair, known as Aventinus (1477-1534) lived here. He stayed at the castle in the early 16th century as tutor to the Duke’s sons. On plans drawn up since the 18th century a garden is marked in front of the "Aventinus House".

On the opposite side a building called the "Haberkasten" used to stand. On the ground floor were stables for horses, and on the upper floor animal feed was stored. This was overseen by a grain keeper who lived in an adjacent tower. In the 19th century, the courtyard was used as a parade ground, and the Haberkasten was demolished. In the 1960s a new building was erected, modelled on the historic original.