Today the rooms of the Bower contain the Municipal Museum of Burghausen.

When it was built in the second half of the 13th century, the Bower, which closes off the west side of the castle courtyard, consisted only of the middle tract opposite the Knights‘ Hall. The ring wall connected it with the Palas on its south side. In the mid-15th century an extension – originally with arcades opening on to the courtyard on the first floor – was built along this wall, joining the Bower to the Palas. 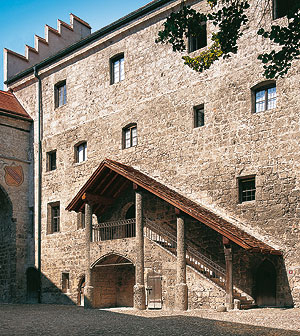 Middle tract of the Bower

It was probably not until the time of Georg der Reiche (Georg the Rich), when Duchess Hedwig maintained a large court at the castle, that the Bower was again comprehensively extended. An extension was built on the side facing the lake which ran the whole length of the Bower as far the Palas, jutting out into the ward and doubling the size of the rooms.

The chapel room thought to have been in this extension is mentioned in a toll invoice of 1485, so that the extension must have been completed by then. This is likely because the Duchess had been living in Burghausen since her Landshut wedding in 1475. It was not until 1872 that another floor was added to the southern and middle tract.

The Bower contained the living quarters of the female members of the court as well as maintenance and store rooms on the ground floor. In 1463 Ludwig der Reiche issued detailed regulations concerning the behaviour of the Senior Mistress of the Court towards the duchess and the young unmarried girls. According to this, the Bower at the time contained both the apartments of his wife Amalie von Sachsen and the bedrooms and living rooms of the young unmarried women. Her daughter-in-law Hedwig, on the other hand, seems to have been living on the second floor of the Palas.