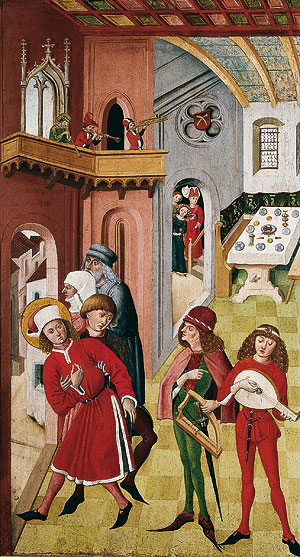 The State Gallery of Burghausen is a branch of the Bavarian State Collection of Paintings. 56 paintings are presented on two floors: the second floor of the castle mainly features late medieval altar panels illustrating the flourishing culture of the monasteries in Upper Bavaria and the neighbouring regions of Austria during this period, while on the third floor are works from the early 17th century attributed to artists associated with the court.

Gabriel Mälesskircher was the most important Bavarian artist in the second half of the 15th century, and in Munich he headed a large artists’ workshop. His most important commission was probably the fifteen winged altars which he produced between 1473 and 1478 for the Benedictine church in Tegernsee. Only a few of the panels have been preserved – as was usually the fate of medieval altars, which lost their function both with the reconstruction of churches in the Baroque style in the 17th and 18th centuries and the dissolution of the monasteries in 1803, when the altars were taken apart and their individual elements scattered. 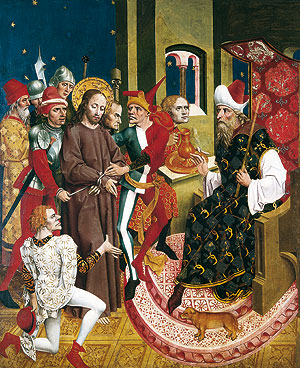 Panels painted by Mälesskircher from the Tegernsee Veit altar and the Benedict altar can be seen in the State Gallery. They show events from the legend of the saints, depicted with the pleasure in narration and vividness that are typical of this artist.

Further important examples of 15th-century Bavarian art on display in this gallery are the altar panels from the monasteries of Attel, Rottenbuch, Bernried and nearby Raitenhaslach. The oldest painting in the gallery was created in around 1425, probably in a Munich workshop.

The touching portrait of Hans Hoffer or Hofer shows a proud medieval citizen. The 30-year-old man from a prominent Salzburg family presents himself as a bridegroom with a white rose. His father Virgil had grown rich from silver and copper mining and became famous as the donor of the high altar of the Salzburg Franciscan church, created by Michael Pacher. 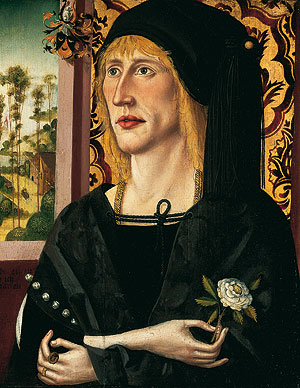 The 10-metre wide pictures, which are probably the largest canvases in Bavaria, are one of the attractions of the castle. They show important events from the history of Bavaria in the 13th to 15th centuries, and were painted by the Munich court painter Hans Werl (died 1608) in the first decade of the 17th century for the Old Hercules Hall in the Munich Residenz (today the Max-Joseph Hall).

They were commissioned by Duke Maximilian I of Bavaria. One of them shows the Battle of Mühldorf in 1258, involving Duke Heinrich XIII of Lower Bavaria (reigned 1255-1290), the builder of Burghausen Castle. The ten paintings – of which six are on display – were originally hung high up on the walls of the hall at the Residenz in Munich, above a series of tapestries depicting the deeds of Hercules.

Since Elector Maximilian I of Bavaria was an enthusiastic collector of works by Albrecht Dürer, copies of works by the Nuremberg master form an appropriate complement to the paintings of Werl.

back to the overview "Palas"